In the past years, special diets have increased in popularity.

From gluten-free and dairy-free to vegetarian and vegan, many people try plenty of different new recipes.

As many reduced the amount of fish and meat that they eat, there are also other reasons why veganism is so popular, including climate change. 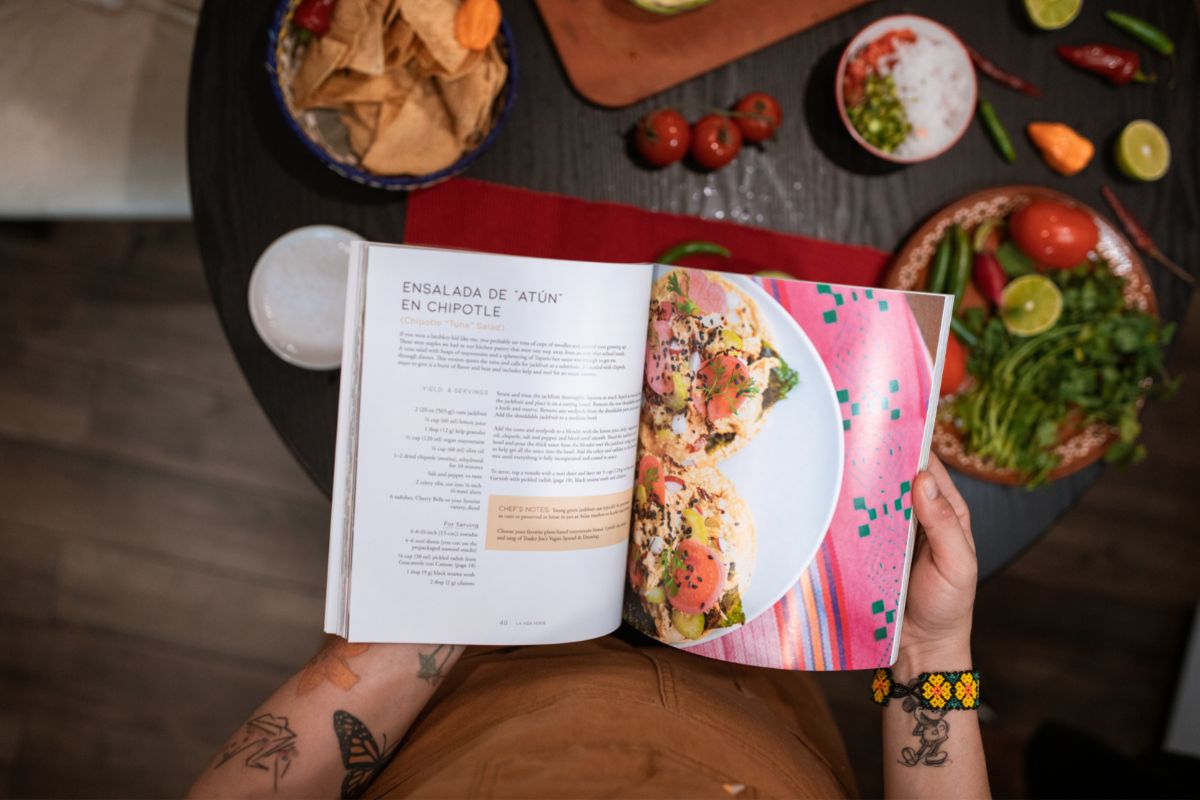 But going vegan doesn’t always seem easy. After all, you want to make sure that you eat the right amount of nutrients.

If you feel a little overwhelmed by finding the right vegan recipes, then a good cookbook can be a handy resource.

You just open a page and follow the instructions.

That’s why, we decided to put together a list of our favorite vegan cookbooks for beginners.

They offer a range of delicious meals for breakfast, lunch, dinner and dessert.

You might even find that some of the hardened steak lovers in your family will put aside their love for meat for some of the recipes in these books.

The Best Vegan Cookbooks For Beginners

Even if it isn’t Veganuary, cookbooks are a great source of inspiration for vegan recipes.

These top vegan cookbooks feature a range of interesting recipes that are quick and easy to make for everyone new to a plant-based diet.

Plant-Based On A Budget

This debut cookbook from Charity Morgan has become a big bestseller.

It combines flavorful recipes with a good dash of creativity.

While Charity Morgan is a trained chef with a culinary degree, it’s not difficult to follow her and the recipes aren’t made for pros.

But thanks to her experience in the professional cooking world, she has plenty of experience to create some delicious and stunning dishes that don’t contain animal products.

This clever cookbook doesn’t just include popular recipes like “fysh” and chips but also super tasty creations that are surprisingly simple.

You can get this vegan cookbook from Charity Morgan on  kitchenartsandletters.com or barnesandnoble.com

Weeknights are a busy time for everyone and it’s often difficult to find something simple and quick enough to put on the table.

Rachel Ama takes the pain out of weekend cooking and she makes creating vegan food so much fun.

What we really loved about this cookbook is that most recipes only require a single pot and a few ingredients.

This is what makes it truly beginner-friendly.

Despite the simplicity of the recipes, there are also quite a few interesting vegetable dishes inspired by Ama’s West African and Caribbean roots.

You can get this weeknight vegan cookbook from Rachel Ama on thevegankind.com

Plant-Based On A Budget

The subtitle “Delicious Vegan Recipes for Under $30 a Week, in Less Than 30 Minutes a Meal” promises a lot of tasty recipes that are super cheap.

Toni Okamoto’s cookbook contains 100 recipes that are made for small food budgets.

What’s unique about this great vegan cookbook is that it takes you through some great money and time saving tips in the kitchen.

The easy-to follow instructions in the book allow you to whisk a few ingredients together with tasty results.

You can find this budget-friendly vegan cookbook on barnesandnoble.com, abebooks.com.

Written by Bakerita blogger Rachel Conner, her great debut cookbook gets you up to speed with everything vegan when it comes to baking, including sugar-free, dairy-free, grain-free and soy-free.

And while a lot of these recipes don’t use the traditional ingredients you may be used to for baking, they taste just as good (or better!).

The book is split into seven individual sections, such as vegan breakfast recipes and more sweet treats for all day every day.

You can find this no fuss vegan cookbook on bookshop.org, barnesandnoble.com

This is the true vegan cookbook for beginners, and if you are just starting out in the big wide world of plant-based food, then you may have come across Vegan Richa’s blog.

The recipes as well as the book are written by Richa Hingle who is an expert in crafting delicious yet easy recipes with lots of flavor.

She is well-known for the Indian recipes but this everyday cookbook takes inspiration from cuisines across the glove.

The over 100 recipes are gluten-free, soy-free, nut-free and, of course, plant-based.

They are surprisingly quick and easy to make, and who wouldn’t like a delicious black bean burger!

You can find this vegan starter cookbook on bookshop.org, walmart.com

What’s good for kids must be good for adults, right?

The easy-to-follow instructions may be aimed at kids but anyone can make these delicious plant-based dishes.

Barb Musick introduces children to the world of cooking and he provides some great basic skills, such as chopping, measuring, chopping and cleaning up.

The book also teaches children how to use some of the most important tools in the kitchen, including a food processor, oven and colander.

This is a great book for involving the kids in making a tasty vegan dinner and dessert.

You can find this vegan kids cookbook on barnesandnoble.com, bookshop.org

When it comes to making some vegan snacks and quick fingerfood, then this party grub cookbook is the best we tried.

Together with dishes such as pumpkin French toast casserole and Mexican lasagna, there are over 100 delicious vegan recipes to choose from.

You can find this vegan party cookbook on walmart.com, barnesandnoble.com

Buying Guide: What To Look Out For In Vegan Cookbooks?

With veganism being so popular, there are hundreds of vegan cookbooks that include a huge variety of recipes.

The number of recipes in cookbooks vary widely.

This usually depends on the theme of the vegan cuisine.

If the book doesn’t follow a particular theme, then you usually get a lot more traditional vegan recipes.

While a fewer recipes in a cookbook isn’t a dealbreaker, check that there is a nice variety for what you would like to make.

If you want a few recipes for breakfast, lunch, dinner and dessert, then it’s a good idea to go with one of the more generic vegan cookbooks.

When you are looking for any type of cookbook, it’s important to keep your cooking skills as well as your interests in mind.

While many cookbooks are written with detailed instructions, it takes a little more for vegan cooking beginners to pick up on more advanced jargon.

This can range from different cooking methods to dietary requirements.

It’s a good idea to check the contents page and the author’s introduction to see who the book is aimed at.

We already mentioned that’s important that you buy a cookbook that follows your interests.

There are a lot of cookbooks that provide some everyday recipes but others also follow a particular theme, such as Halloween, Christmas or vegan party snacks.

As a beginner, it’s easier to get a generic vegan cookbook for everyday use.

Once you are up to speed with some of the terms, you can tackle the themed books and make some more seasonal dishes.

Nobody can resist a good foodie photo but it isn’t just about aesthetics.

It can also help you make your dish when you follow a vision.

Some cookbooks also provide step-by-step instructions with a photo guide which shows you exactly how each step is done.

Photos and illustrations can really make a difference to a cookbook and they can also inspire you to enjoy cooking.

Keep an eye out for the serving sizes per recipe when you are looking through cookbooks.

If you are just on your own, then a cookbook that has serving sizes for two is perfect.

However, if you want to feed a large family, then you’ll either need to convert the serving sizes yourself or you need a cookbook with recipes for more people.

All cookbook recipes should show the preparation time as well as the cooking time.

It’s a good idea to keep an eye out for where these times are stated on the page.

If you just want to quickly whisk something together, then you will need to see quickly on the page how long the recipe will take.

Depending on where you are, choose a cookbook that uses the measurements you are familiar with.

It’s difficult to convert UK measurements when you are in the US, for example.

While many vegan and vegetarian cookbooks have conversion tables for measurements in the back, it can be annoying to move to and fro between your recipe and the conversions.

As a beginner, it can be difficult to follow every instruction to the letter, and every tip from a pro can make your life so much easier when it comes to cooking.

Check if your chosen vegan cookbook has a some special hints and tips included on the recipe pages.

So many food bloggers have turned their most popular vegan recipes into a handy cookbook, so you may find that your favorite online author has also written a book.

This can make it easier for you because you know the style of the blogger already, and you may already like their recipes.

Does Gordon Ramsay Have A Vegan Cookbook?

No, Gordon Ramsay doesn’t have a vegan cookbook, yet.

He has been avoiding the vegan trend for quite a number of years but has admitted that he also does enjoy vegan food.

So, there is hope that we may yet see a cookbook coming from Gordon Ramsay.

Does Jamie Oliver Have A Vegan Cookbook?

No, celebrity chef Jamie Oliver hasn’t released a vegan cookbook yet, but he has published a range of vegetarian cookbooks with meat-free recipes.

There is a large range of beginner vegan cookbooks on the market.

From vegan cookbooks for kids to vegan party grub, it’s a good idea to peruse a good bookshop or check online for some of the amazing vegan cookbooks we mentioned above.

Clara Howie
Hi, my name is Clara Howie and I have been a vegan since I was 16 years old. Now, eight years later, I’d like to think that I’ve learned a few things about this way of life!

I can’t lie, when I first began my vegan journey, the majority of my diet did consist of just vegetables and fruit with the occasional piece of tofu thrown in.

I got back on my feet, though, and I vowed to never make that same mistake again! I spent my free time learning about how to nourish my body properly without the use of meat and animal products. It actually turned out to be pretty easy!

Now I am healthier than ever and working alongside a nutritionist to ensure that I don’t slip up again.

That’s what this website is all about! Helping more people turn to the vegan lifestyle in a healthy and happy manner. I’ve got recipes, advice, tricks, tips, and more coming your way, so don’t miss it!