Jello is easily one of the best desserts ever created. It is incredibly basic, but sometimes simple dishes are the best, and that is why we love jello so much. But Most important question is that : Is jello Vegan?

You really can’t go wrong with a nice pot of jello, and with so many different flavors to choose from, there really is something for everyone! 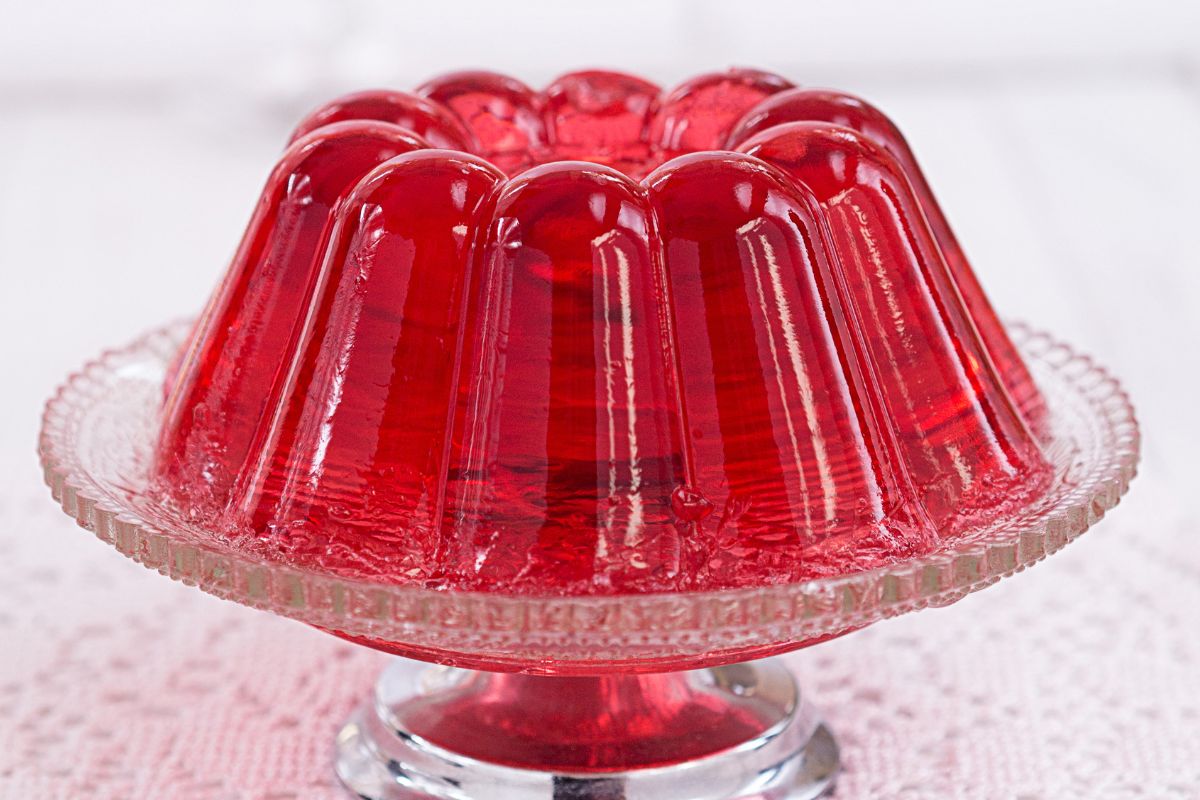 But, if you are following a vegan diet, jello is just one of many foods that you may be unsure if you can enjoy. Most of the time, unfortunately, jello is not vegan.

So, if you follow a vegan diet, and you want to find out more about jello. Keep on reading!

Jello is the name most commonly associated with gelatin-based desserts. Jello is well-known for its wobbly appearance and rubber-like consistency. It is also well-known for coming in a variety of bright colors, and a variety of different flavors too.

Here in the USA, it has become widely referred to as jello due to the brand Jell-O. Jell-O is a trademarked brand owned by Kraft Heinz.

But due to the popularity of this brand, gelatin-based desserts are generally known as Jello in the US, whereas across the pond in the UK, they are known as jelly.

There are a variety of different desserts that could be referred to as jello. Generally speaking, however, when people talk about jello, they mean the fruit-flavored gels that usually come in pre-made tubs.

As you would expect, the key ingredient in these gelatin-based desserts is gelatin. So, let’s take a look at what this means for those following a vegan diet.

We’ll take a look at that shortly, but in short, it is an animal by-product, and because of this jello is not vegan.

Gelatin is a product that is made using animal collagen. Most commonly this collagen is harvested by boiling skin, tendons, ligaments and bones harvested from pigs or cows.

In the boiling process, the protein of the collagen is separated from bones, ligaments, etc.

This is then dried, treated with an acid base and then filtered. Through this process, the collagen is separated completely, and then it can be used as gelatin.

As you know, vegans cannot eat any animal byproducts. So, the process that is used to create gelatin makes it unsuitable for those following a vegan diet.

As gelatin is the key ingredient in jello, this also means that jello is not suitable for vegans. At least not in most cases.

Traditionally, jello is made using gelatin. It isn’t the only sweet dessert that uses gelatin, as many sweets are made using this too.

However, as veganism has become more popular, more and more dishes that once weren’t suitable for vegans have been modified so that they are suitable for this diet. So is this also the case for jello? Let’s find out. 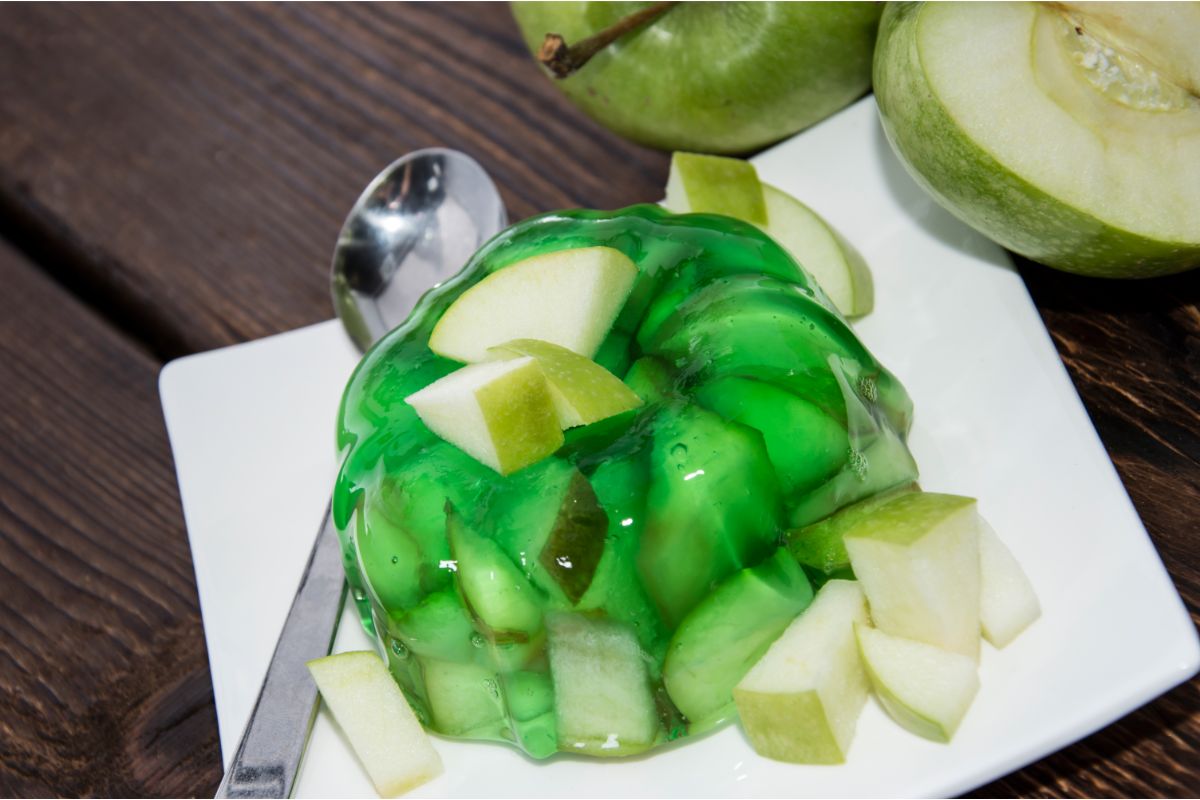 Can You Get Vegan Jello?

Well, if you really enjoyed this dessert before you started following a vegan diet, you will be happy to hear that there are vegan alternatives for jello.

There are actually quite a few different brands that have created vegan jello, including store own-brands. So, you do not necessarily need to break the bank to get your hands on some vegan jello.

Most of these vegan jello products will use something called “agar agar” instead of gelatin. Agar agar is incredibly similar to gelatin, and it is even often marketed as gelatin.

But instead of being made using animal collagen, it is made using a type of seaweed. Is jello Vegan?

Agar agar is used in a lot of different aspects of cooking, not only in desserts. It is often used to thicken jams and soups. It is essentially the same as gelatin, except it is made using plant-based ingredients instead of animal-based ingredients.

With that in mind, let’s take a look at some of the best vegan jello brands on the market.

Depending on where you shop, you will likely encounter a range of different vegan jello brands. As we have said, most stores will include vegan jello in their vegan own-brand if they have one.

So, if you are looking for a cheap vegan jello-alternative, this is probably the best place to look. Is jello Vegan?

If you are happy to spend a little extra, then there are a couple of brands that you should be aware of. But, it is worth noting that, as is often the case, these brands will be a little more spendy than traditional jello brands.

SimplyDelish is a great company to keep an eye out for. They produce a number of different vegan jellos in a range of different flavors. This brand is popular across the USA, and they will always be our go-to when it comes to vegan jello.

But, if you are unsure which brand is best for you, we would simply recommend heading to the vegan section in your local grocery store.

There will probably be a range of vegan jello brands there, and deals available on different products. From pre-made to packet jello, there are lots of different types of vegan jello that you can buy, and they all taste just like the real thing!

Is Jello Vegan Or Vegetarian?

Jello is a popular snack food that is great for a quick snack. It is usually free of fat, gluten and sugar. There are many flavors available, including cherry, lemon, orange, and strawberry. You can find jello vegan at most grocery stores.

Vegan jello can be found at local grocery stores, online retailers, or in boxed packages. The best way to determine if a jello product is vegan is to read the ingredients. Almost all mainstream commercial jello vegan products are made with animal-derived gelatin.

Gelatin is derived from animal bones and skin. This ingredient gives jello its jelly-like texture. When jello vegan is mixed with a fruit juice, it forms a colorful dessert.

Agar agar is another vegan substitute. Agar agar is a gelling agent that is commonly found in seaweed. To use agar agar in a recipe, you can dissolve a small amount of the powder in water and then add the liquid.

If you are interested in a vegan version of jello vegan , agar agar is a good choice. It is also much cheaper than a packaged mix. However, agar agar is low in important nutrients and has a high calorie count.

Agar agar is typically sold in sheet or powder form. It is easy to use, and it works well as a gelatin substitute.

In short, no, jello is not vegan. Traditional jello is made using gelatin which in turn is created using animal collagen. As animal collagen is an animal byproduct, it is not suitable for vegans, which means that jello isn’t vegan-friendly either.

However, there are vegan-alternatives to traditional jello which you can enjoy if you follow a vegan diet. Thank you for reading!

Clara Howie
Hi, my name is Clara Howie and I have been a vegan since I was 22 years old. Now, ten years later, I’d like to think that I’ve learned a few things about this way of life!

I can’t lie, when I first began my vegan journey, the majority of my diet did consist of just vegetables and fruit with the occasional piece of tofu thrown in.

I got back on my feet, though, and I vowed to never make that same mistake again! I spent my free time learning about how to nourish my body properly without the use of meat and animal products. It actually turned out to be pretty easy!

Now I am healthier than ever and working alongside a nutritionist to ensure that I don’t slip up again.

That’s what this website is all about! Helping more people turn to the vegan lifestyle in a healthy and happy manner. I’ve got recipes, advice, tricks, tips, and more coming your way, so don’t miss it!